Introduction to Ultrasound-Guided Fine-Needle Aspiration of the Thyroid 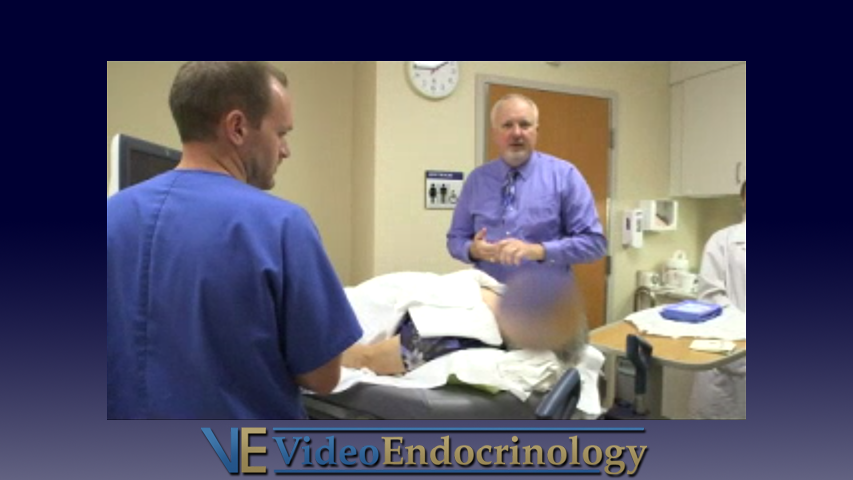 Introduction: Ultrasound-guided fine-needle aspiration (FNA) is the primary method to evaluate thyroid nodules for the potential presence of malignancy.1–3 This video is intended as an introductory review on the performance of this procedure.

Methods: Informed consent was obtained from the patient to perform an ultrasound-guided FNA of the thyroid nodule of interest. The patient was then placed in supine position with the head extended within the limits of comfort. A pillow was placed behind the patient's shoulders to achieve optimal neck extension. The patient's neck was prepped with a povidone-iodine solution. A sterile ultrasound probe cover and gel were utilized to ensure aseptic technique. After identifying the target thyroid nodule by ultrasound, four separate 1 ¼″ 27-gauge needles were serially introduced to obtain a specimen for cytological review. Mirror image slides were prepared from three passes with one set of slides undergoing Romanowski staining and the matching sister slides being placed in ethanol for subsequent Papanicolaou staining. The specimen from the final needle pass was placed into a solution to retain for future molecular testing, if indicated. The Romanowski-stained slides were reviewed to ensure an adequate sample of at least 10 groups consisting of a minimum of 10 cells, with the cells being present on at least two slides.4,5

Conclusions: Adequate cytological specimens can be obtained by ultrasound-guided FNA with three separate passes of a 27-gauge needle. The procedure can be performed with only minimal discomfort to the patient even if local anesthetics are not used.

The authors have no conflicts of interest to report. Informed consent was obtained from the patient for both FNA and video recording of the procedure.

Video was initially recorded at the Mayo Clinic Florida for graduate medical education purposes and use by residents in training.