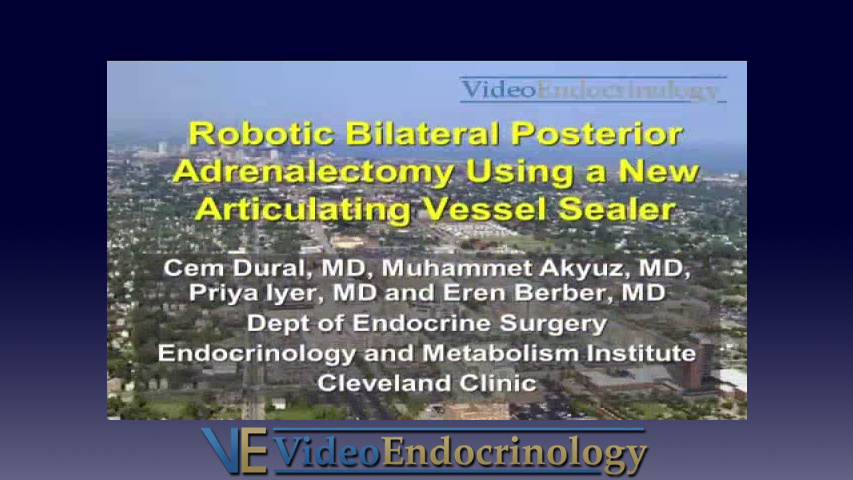 Introduction: Patients with adrenocorticotropic hormone (ACTH)-dependent Cushing's syndrome from unmanageable primary sources may benefit bilateral adrenalectomy. This requires a complete resection of all adrenal tissue for long-term success.1 The laparoscopic posterior retroperitoneal (PR) approach is an alternative to the lateral transabdominal technique for removing adrenal tumors.2 For bilateral adrenal tumors, PR approach might facilitate the surgery, as repositioning of patient and abdominal entry is not required. Nevertheless, the PR technique has certain drawbacks, such as instrument clashing and limitations of working in a small space. We previously showed that a robotic technique could overcome these limitations.3,4 Our initial experience has involved the use of an ultrasonic robotic vessel sealer without articulation. The aim of this video is to show the utility of a new articulating robotic vessel sealer to perform this procedure.

Case: A 61-year-old male patient was found to have edema, hypokalemia, and fatigue 3 years ago. He had an elevated serum cortisol and ACTH levels, as well as a high 24-hour urine cortisol level, consistent with ACTH-dependent Cushing's syndrome. No source for ectopic ACTH was identified on extensive imaging. The ketoconazole treatment was unsuccessful. With worsening clinical symptoms, he was referred for bilateral adrenalectomy. The patient was intubated supine and flipped to prone position on the operating room table. Initially, the right retroperitoneal space was entered using an optical trocar. The retroperitoneal space was created with a balloon trocar and insufflated. The additional two trocars were inserted. Intraoperative ultrasound was performed, and the adrenal gland was identified. The robot was docked, and using a robotic vessel sealer and Maryland grasper, the gland was circumferentially dissected. The adrenal vein was divided with the vessel sealer. The specimen was removed using a specimen bag. Hemostasis was obtained and trocars removed. Then, attention was directed to the left side. The left side adrenal was excised as same technique for right side. The pathology showed bilateral adrenal cortical hyperplasia. The patient was discharged home on postoperative day 1 uneventfully.

Conclusion: This video illustrates the technical details of bilateral robotic posterior adrenalectomy using a robotic articulating vessel sealer. Bilateral posterior approach was preferred as there was no entry to the abdomen and no need to reposition the patient for the contralateral side. The robotic vessel sealer facilitated the procedure by providing articulation in a small space.

All authors declare no conflict of interest.